Review: Mine by Stacey Kennedy Book 7 and the final book of the Club Sin Series 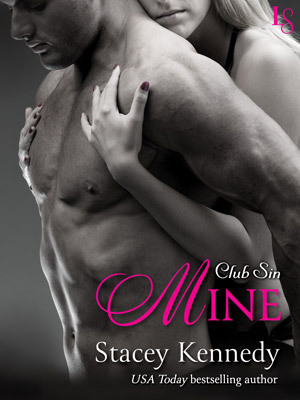 In a series with started with "Claimed" the story of Dmitri and Presley it seems fitting that it also ends with this dynamic couple. Yes, this is the conclusion to the Club Sin series. We have read 7 books now and "Mine" has done a fantastic job of tying all the loose ends together giving us a very satisfactory finale. We also get to meet the main characters of Stacey Kennedy's new spin off series "Dungeon's Key". Thanks to Netgalley for allowing me to read this ARC early in exchange for an honest review.

I totally enjoyed this novella I"m so happy that SK took all the loose ends of the entire series plots and subplots and tied them up nicely. There is closure for the reader which allows us to look forward the new series that will be coming up in the future. I loved seeing Stacey Kennedy's writing mature and get more polished as the series continued, she got so much better at building the characters and making them easy for the reader to relate to and care about. Her Dom's were all good stern alphas that made the reader wiggle in her chair when the steam started to hit boiling point.