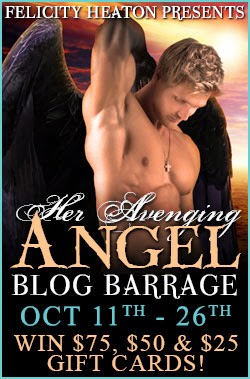 Here’s more about Her Avenging Angel, including an excerpt from this paranormal romance novel.

Once a proud angel of Heaven, Nevar is now a servant of Hell, bound to a new master—the King of Demons. Consumed by darkness and driven to seek revenge, he set in motion a series of events that awakened the Great Destroyer, a force that will bring about the apocalypse. Now, he is the creature’s master and the fate of our world rests in the hands of an angel with only darkness in his heart.

Lost in the mortal realm without any recollection of how she came to be there, Lysia is only aware that she has survived a great battle. When she stumbles into a demon bar, she finds more than a chance to discover what happened to her—she finds a dark and deadly angel warrior who stirs fire in her veins and awakens soul-searing passion she cannot deny.

With the mounting threat of the Great Destroyer, the forces of Heaven and Hell against him, and a band of dangerous angels intent on capturing Lysia on his heels, can Nevar protect the beautiful woman who is light to his darkness and find the strength to save the world?


Find the links to your preferred retailer at: http://www.felicityheaton.co.uk/her-avenging-angel-romance-book.php 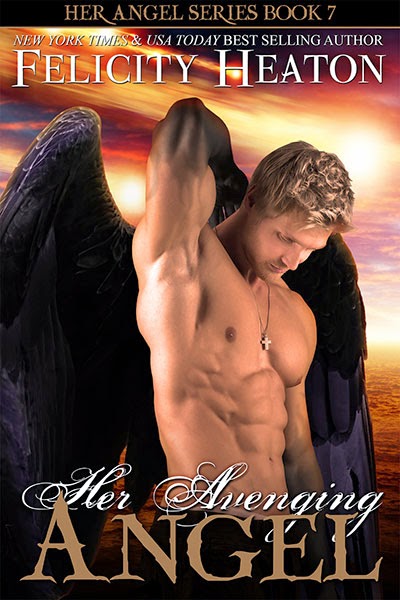 Nevar shoved the heavy stone door open and entered the bright crystal chamber. The jagged walls were brightest, blinding white that reminded him of Heaven and stung his eyes. They adjusted gradually, allowing him to see more of the room. In the centre stood a raised oblong dais of pure clear crystal. To the left of it on the floor of the chamber was a dull patch where he had spilled Asmodeus’s and Liora’s blood and it had soaked into the crystal.

He moved deeper into the room and came to stand over that spot, looking down at it and his booted feet.

Red still swirled within the layers of crystal.

It was further from the surface now. He had made a habit of entering the chamber each day to see if the blood was sinking deeper into the crystal and always ended up wondering if it was heading towards a certain point far beyond his vision, slowly working its way down each crack and layer to the Great Destroyer.

The Devil had been his usual cryptic self when Nevar and Asmodeus had asked him for more details about the destroyer, giving answers that provided no illumination. Nevar still didn’t know if the destroyer was actually beneath all the layers of crystal below him, or whether it was linked to this place from one far away that only the Devil knew about.

Nevar sat on the raised slab, swung his legs up and lay down on it, staring at the glowing ceiling.

Light danced across the crystal shards, reflecting rainbow colours like an aurora. Whenever he grew restless, he came to this spot and lay for a while. It was peaceful and soothing, and a much-needed distraction from his heavy thoughts.

Whenever he was in this room, he felt different. He could never put his finger on the why of it though. The only way he could explain it was that he no longer felt alone. There was a presence in this room that calmed him and filled a hole in his chest, one that gnawed at him when he was beyond the chamber walls.

His eyes slipped shut and he forced them open again, stifling a yawn at the same time.

Nevar rested his hands on his chest, over the mark there, and tried to track the brighter spots of light as they slowly danced over the crystals like fireflies. His eyelids drooped again, heavier this time. He struggled to lift them and drowsily stared at the ceiling as it spun out of focus, blurring and whirling together.

Pain skittered across his chest.

He grimaced and then opened his eyes. The crystal chamber came back into focus. He had fallen asleep.

“Fuck,” he growled and sat up, swinging his legs over the edge of the dais, and quickly looked off to his left, expecting Asmodeus to be there in the doorway, glowering.

Nevar huffed, planted his hands on the edge of the dais next to his bare thighs, and looked down at his knees.

The part of him that was glad his lazy master hadn’t caught him sleeping on the job warred with the part that snarled it was typical of Asmodeus not to show up to relieve him.

He could die down here and it would be decades before Asmodeus realised it.

The bastard was so wrapped up in teaching Liora how to read his magic books, and so wrapped up in her too, that he didn’t care about anything else, not even the duty the Devil had given to him as one of his servants.

Well, Nevar didn’t care about anything other than getting something to drink.

Deep breath in, and out.

He didn’t need to drink.

His stomach growled and his fangs itched, one baying for booze and the other for blood. He ignored both of them and slid off the dais, landing on his feet. He looked down at his violet-edged black greaves that protected his shins and his black leather boots. The crystal beneath them shimmered, light pulsing outwards from his feet.

His head swam and sent the room spinning.

Nevar leaned back against the crystal bench for support.

He didn’t need to drink, but he did need to eat. If he didn’t eat soon, he would pass out, and what use would he be as a guard then?

He needed to get out of this place and get out of Hell, away from the Devil who had made it his pet project to drive Nevar insane over the past month by taunting him in his head.

Away from his bastard master Asmodeus.

He needed some freedom and air.

He needed to fly.

He needed a break.

Just a small one.

Maybe it would make Asmodeus sit up and take his duty more seriously too. The Devil had banned Asmodeus from leaving Hell without his permission, and that meant the angel would have to ask his master for said permission in order to come after Nevar and would have to explain what had happened. The Devil would probably punish Asmodeus.

Asmodeus would definitely punish Nevar, but it would be worth it.

No punishment Asmodeus or the Devil could inflict would be worse than what he was already suffering.

He was starving, parched for blood, and unable to shake the quiet craving for a fix of Euphoria that had been riding him for what felt like forever. It drove him mad and he feared he would snap if he stayed down here alone much longer, and would end up in the mortal world hunting down a demon bitch.

He would deny both hungers, was strong enough right now, but he couldn’t deny the hungers for a drink and some food.

He strode to the door of the crystal chamber, cast one look back into it, and then pulled the door closed, shutting out the light.

He threw his free hand out in front of him, calling a portal. Black smoke curled out of the air and swirled like a maelstrom, growing denser as the portal enlarged to match his six-foot frame and widened enough to allow him through.

He released the door and focused on himself, using a fraction of his power to first reinstate his back and chest plate of his armour, and then cast a glamour that would change his appearance to mortal eyes. He dressed himself in black jeans, a charcoal t-shirt, and army boots, and masked the obsidian skin that reached past his elbows and the black claws that tipped his fingers.

He ran those fingers through the messy jagged strands of his silver-white hair, preening it back to ensure it concealed his small horns from immortal eyes. He hated it when people at Cloud Nine stared at them and whispered about him behind his back, and more often than not it was the horns that got them talking. The last thing he needed tonight was someone pushing his buttons when his fuse was shorter than usual because of the overwhelming combination of hunger for booze, blood, Euphoria and food.

He had the angel equivalent of low blood sugar right now and was liable to rip the head off anyone who merely looked at him funnily.

Nevar stepped into the portal and out into the wide alley in London.

The neon sign above the burly skinhead bouncer shone down on him like a light from Heaven.

One drink, some food, and then he would head straight back down to Hell. Cross his heart. The chamber wouldn’t miss him. His master definitely wouldn’t.

Her Avenging Angel is available from:

Find all the links, a fantastic 6 chapter downloadable sample of the book at her website: http://www.felicityheaton.co.uk/her-avenging-angel-romance-book.php

Books in the Her Angel paranormal romance series:


To celebrate the release, she’s holding a FANTASTIC GIVEAWAY at her website

Find out how to enter the Her Avenging Angel international giveaway (ends October 26th) and be in with a shot of winning a $75, $50 or $25 gift certificate at her website, where you can also download a 6 chapter sample of the novel: http://www.felicityheaton.co.uk/her-avenging-angel-romance-book.php

If you want to know more about Felicity, or want to get in touch, you can find her at the following places: